On January 21st the PMCA Board of Directors were paid a visit by Congressman David McKinley.  During the hour-long visit, we discussed hot topics in West Virginia such as Prevailing Wage and Right-to-Work legislation as well as state infrastructure, energy issues, multi-employer pension plans and healthcare.  It was a pleasure to meet with David again to discuss these issues and hear about his ideas. 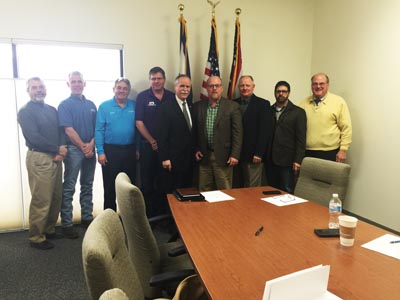 On the Prevailing Wage front, HB4005 for the full repeal of the state prevailing wage passed through the House Government Organization Committee and is on its first reading on the House Floor on January 22nd.  The Right-to-Work legislation, SB1 passed through the Senate Judiciary Committee, then through the Senate and now it’s been sent to the House Floor.  The best and probably only chance of stopping either one of these bill passing through would be if the Governor vetoed the bills, and the now-empty Senate seat were filled with a Democrat, because overriding the Governor’s veto will require a vote of 50% plus one.  Only time will tell.

This site uses Akismet to reduce spam. Learn how your comment data is processed.